In order to offer first class service to all types of trade, from traditional sectors to new technologies, the Port of Bordeaux has 7 specialised terminals: le Verdon, Pauillac, Blaye, Ambès, Grattequina, Bassens and Bordeaux.

Atlantic port of bordeaux invests every year along with private companies at the terminals to improve competitiveness while protecting the environment.

The hydrocarbon cargo sector covers all traffic relating to petroleum products. The Port of Bordeaux handles between 4.2 and 4.7 million tonnes of hydrocarbon products per year, 90% of which are imports and 10% exports. This sector represents over half of the Port’s overall annual traffic. 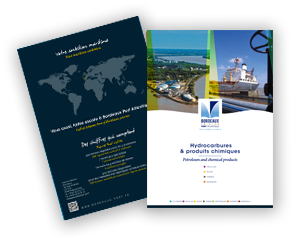 There are multiple imported products including petrol, diesel-oil, jet fuel, domestic fuel, fuel oils, GPL​, bitumen, biofuels and crude oils. Most of these products are unloaded in Pauillac, Blaye or Ambès. Atlantic Port of Bordeaux is the largest hydrocarbon hub in southwestern France.

The cereals sector includes all trade in corn, sorghum and straw cereals such as wheat and barley. Corn remains the biggest cereal crop in southwestern France, with around 1 million tonnes exported from the port of Bordeaux.

In the heart of New Aquitaine, a major cereal growing region, Atlantic Port of Bordeaux is a key partner of the cereal and oilseed industry, which accounts for around 15% of the port’s annual traffic. Atlantic Port of Bordeaux has an increasing number of importers from North Africa, as well as the usual importers from the neighbouring regions of Southern Europe and the United Kingdom. These new markets, combined with the quality of the cereals produced, allow multi-cereal companies to develop trade and strategic networks for the future. 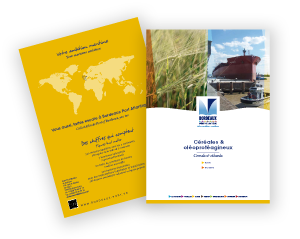 With 600,000 tonnes of grain, oil and oil cake imported/exported annually, Saipol is one of the key players in the oilseed industry, boosting traffic at the Port of Bordeaux and redirecting it towards the export market (sunflower oil cake, rapeseed oil cake).

The Port of Bordeaux handles 20,000 to 35,000-tonne ships for grain imports. A benchmark in the oilseed industry, the Bassens site stands out for its logistics chain which excludes road transport. The grain arrives by ship or train and is unloaded, then crushed by the Saipol plant. A portion of the oil produced is then used to manufacture biofuel, which is in turn exported by sea.

Fluvial and marine aggregates represent a large percentage of the traffic of the port of Bordeaux, which intends to reinforce the competitiveness of this sector. The attractiveness of the Bordeaux metro area is driving the need for housing and infrastructure. The Gironde consumes more aggregates than it produces and must find distant sources of supply. To handle the deficit of more than three million tonnes, aggregates are transported by road, representing nearly 25% of the road freight on the roads of Aquitaine. Maritime imports supplement the supply of aggregates from terrestrial or alluvial quarries.

Maritime transport is the least polluting method per tonne transported, and the efforts of the Port of Bordeaux to promote alternative products are helping reduce Greenhouse Gases for Bordeaux, the Department and the Region.

Nearly 14 million euros were invested to develop the Grattequina terminal, the 7th site of the Port of Bordeaux authority. Located in Parempuyre and Blanquefort, this new site on the left bank, close to the construction sites in the Bordeaux area, handles aggregates as well as oversized and heavy lift cargo.

The Port of Bordeaux also exports high purity quartz carried in by rail from the quarries in Clairac (Lot et Garonne region) by the company IMERYS. This quartz is then loaded on small capacity ships (3,500 tonnes) and shipped to Norway (about 20 kt / 30 kt per year) where it will be crushed and used in manufacturing electronic components.

This is a high added-value trade for the port community, as container traffic reflects the commercial and industrial activities in southwestern France. In Bordeaux, container traffic is growing rapidly (18,000 TEU in 1995, 62,700 in 2015), with two global operators (MSC and CMA CGM)

MSC and CMA CGM each serve more than 300 ports worldwide every week with reliable, regular routes designed to meet industrial and commercial demand.

Atlantic Port of Bordeaux, your port of call in a single click! 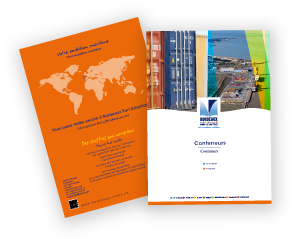 Load your cargo in Bordeaux and cut down costs:

By loading your containers in Bordeaux, you can save on pre-haulage, help reduce the carbon footprint of the product transported, save time on customs clearance, and improve the logistics supply chain.

These products make up the mineral fuel division of Atlantic Port of Bordeaux, essentially consisting of coal and petroleum coke.
Coal, an organic plant matter, is used in industry, whereas petroleum coke is a by-product of oil refineries.

The constraints associated with competing energy resources (rising oil and natural gas prices) and the abundance of coal reserves around the world make this a competitive sector that faces significant environmental challenges. At Bassens, close to the coal terminal, the manufacturers Michelin and Lafarge are emblematic of this trade.

Atlantic Port of Bordeaux intends to strengthen this sector by offering an alternative to road transport to support manufacturers in their energy transition. 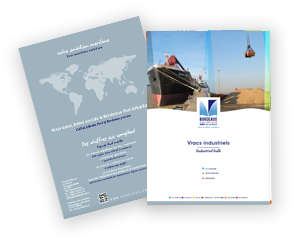 These new activities are in line with the port’s environmental objectives. The development of waste recovery sectors is based on clean, massive-scale modes of transport. The Garonne and the port are bringing their efforts to bear on organising these sectors. Atlantic Port of Bordeaux is committed to supporting the development of clean river and maritime port activities.

The Bassens site is also one of the 18 shipbreaking sites in the world approved by the European Union and the largest in France.

This distinction recognises the excellence of the achievements, skills, procedures and equipment of the port’s recycling centre. 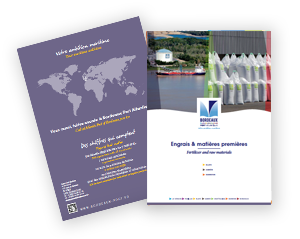 The fertiliser and raw materials sector is one of Atlantic Port of Bordeaux’s leading sources of traffic, accounting for about 600,000 tonnes per year, 7% of the total tonnage. The importance of this sector is directly related to the agricultural characteristics of the Aquitaine region. Atlantic Port of Bordeaux handles a large range of fertilisers, requiring a certain level of expertise in terms of the unloading and storage of products. With approximately 300 kt of imported manufactured fertilisers per year, the port is specialised in receiving fertilisers such as ammonia, potash and liquid nitrogen fertilisers.

Today, ammonia is imported exclusively by sea by Yara Ambès to be processed into fertiliser. Imports are expected to grow considerably in the coming years, with exemplary GHG emissions in Europe.

Historic and competitive sector, the timber sector is composed of 3 segments:

The Upper Bassens terminal has historically been home to timber stakeholders who import northern and Scandinavian wood and export containerized wood for construction. The timber is processed in the port area or sent to the inland sawmills to supply the construction market.

Wood for energy is fuel in the form of pellets or chips made from timber industry scrap. The sector has great potential because the demand for wood for energy should exceed local resources by 2020.

2 timber industry operators of are installed on the quayside:

Exports are mostly local timber (Landes pine) shipped out in containers in the form of parquet, panelling or timber formwork. 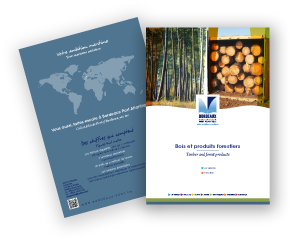 Atlantic Port of Bordeaux intends to consolidate this traffic, with a view to sustainable growth, based on trade in tropical timber and the development of pellets and wood chips.

The port of Bordeaux is a member of “Le Commerce du Bois”, an association formed by professionals of the French timber sector (agents, importers and wholesalers).

Heavy lift cargo and the sectors of the future (aerospace, MRE)

Atlantic Port of Bordeaux has the strengths needed to meet the challenges of oversized cargo logistics. 3 of the sites are complementary for receiving heavy or bulky cargo and can also accommodate new industrial activities, in connection with the economic orientations of the region.

Atlantic Port of Bordeaux has expertise in transporting oversized cargo for all sectors of activity, including aeronautics, aerospace, industry, wind turbines and energy. The port infrastructure offers all the equipment and services for handling of this type of cargo: high capacity cranes and gantry cranes, land availability and storage warehouses at the quayside, strong quays, experienced port operators.

Sectors of the future

The port of Bordeaux plays a strategic role in the development of the region. It is directly involved in energy projects, for which it has a major asset: vast land areas dedicated to industrial port projects.

The Port of Bordeaux is a driver of the economy and supports innovative projects such as the development of river turbines. The Gironde estuary has a significant potential for exploitable energy and boasts a unique experimental and test site in Europe, SEENEOH, dedicated to river turbines.

As a prestigious call destination, Bordeaux is one of the few European cities that give cruise ships of up to 250m the chance to dock in the heart of the city, in the centre of a UNESCO World Heritage site packed with restaurants, shops and cultural attractions. This call offers passengers the opportunity to truly explore and enjoy Bordeaux and its region. There are two additional options for cruise ship docking, allowing operators to make a decision based on ship size and itinerary: Bassens, on the right bank near Bordeaux, and Le Verdon, a deepwater port at the mouth of the estuary, the gateway to the Médoc region and its world-famous winemaking châteaux.

The port of Bordeaux is also working on a project for a new quay for larger cruise ships, which would be located in Pauillac, near the vineyards and one hour from central Bordeaux. This new quay will make it possible to ramp up activity in the large ship segment (currently served at Le Verdon), a segment where the Port of Bordeaux is under-represented.